Published on March 3, 2020 by Reham Youssef and Jessica Rayes 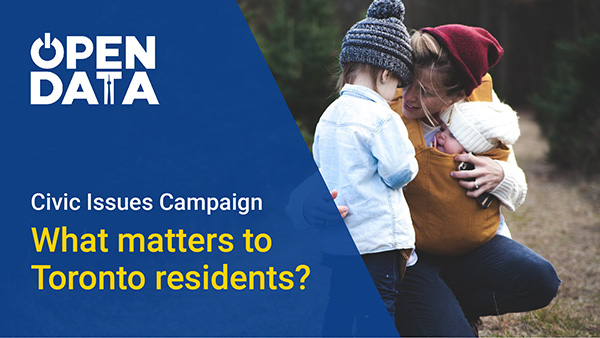 Background: What is the civic issue campaign?

In 2019, the Open Data team launched a campaign in order to help us identify as well as prioritize the release of high-quality, in-demand data linked to the City’s 5 priority civic issues. By doing this, not only do we look to target the release of datasets that align to these issues, but we also want to understand how these datasets may help mitigate or solve these issues. The Mayor’s Office as well as the Open Data team have identified the 5 priority areas as: Affordable Housing, Poverty Reduction, Climate Change, Fiscal Responsibility and Mobility. Together, these efforts align to our commitments outlined in Section 1b of our Open Data Master Plan.

Through the creation and distribution of a public questionnaire, we collected a total of 875 dataset requests, each of which indicates the type of data a respondent would like to see available, what civic issue(s) the dataset aligns to, as well as their specific output. We shared the questionnaire through our social media channels (Twitter, Linkedin) and newsletters (The Open Data Update, TransformTO) to the public between July 16 and October 2nd 2019. Each request submitted through the questionnaire will be measured against a recently developed priority framework which uses an algorithm to determine which datasets are most important to release. This allows us to be more strategic when engaging with Divisions/Agencies, allocating time and resources towards the release of datasets that provide the greatest value. The prioritization framework will eventually allow us to begin assigning a ranking score on all requests we receive. We plan to make these scores publicly available, which will provide greater transparency around the requests we receive and their place in the queue. The algorithm used to calculate priority is made up of 4 groups, and each element within each group has a unique weighting factor:

Ultimately, the higher the score, the greater priority the dataset holds. This gives the Open Data team a more strategic approach when identifying datasets for release through the Portal.

The first step in preparing the data for analysis started with an extract of the raw data from Checkmarket; the survey tool used to design the questionnaire. To work with the data, I opted for google sheets; a free, accessible and fairly intuitive tool to use that is ideal for basic data preparation and cleansing. As you can see, the raw data extract from Cherkmarket wasn’t pretty: In order to clean the data, I separated all requests by civic issue. I then reviewed each response and split requests that referenced multiple datasets in a single request. Once I extracted individual requests from all the responses received through the questionnaire, I began ascribing each request a thematic ‘tag’, for instance; spending, taxes, construction, water, pollution. This exercise allowed me to begin clustering similar requests under a shared theme. The challenge for me was avoiding the use of similar tags (e.g. Energy use, Energy Spending, Energy Consumption) as well as clustering requests objectively with limited context readily available.

Analysing the data for key insights

Before diving into the analysis, I identified a number of research questions I was interested in answering: When reviewing the total number of requests received per civic issue, the breakdown was the following: I then looked at the top tags collected per civic issue. Again, each tag represents the thematic grouping of similar dataset requests. The tables below display what were the most popular tags associated with each civic issue, as well as how many individual requests the tag represents.

In total, there were: 54 unique tags for climate change, 52 for affordable housing, 48 for poverty reduction, 46 for mobility, and 31 for fiscal responsibility. What was surprising was the number of N/A tags applied to the requests received for each civic issue. Requests with an N/A tag were in fact requests for information, policies, procedures; too general or broadly phrased (e.g. ‘water data,’ ‘budget data’); or not a dataset request at all (e.g. a rant or complaint). This leads me to conclude that open information is highly desirable and needs to be made more accessible to the general public. What is also interesting is that many of the requests received were related to datasets already made openly available through the Portal. An example of this when reviewing the numerous requests for demographic and income data, such as income by neighbourhood, which exists in our Neighbourhood Profile dataset. These findings indicate a need for improved search and discoverability of datasets on the portal, particularly those that align to civic issues.

This is a simple, preliminary analysis of the requests received through the civic issue campaign, which has resulted in some interesting, unexpected findings, such as requests for data already available through our Open Data portal. In terms of next steps, we will analyze all requests received in order to determine their level of priority, particularly in relation to the recent recent motion passed by the General Government and Licensing Committee.

How you can help:

Want to take a stab at analyzing which requests received through the campaign will have the greatest priority score using our prioritization framework? Check out the dataset on our portal, and be sure to share your findings with us by emailing opendata@toronto.ca.